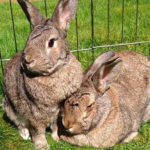 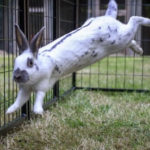 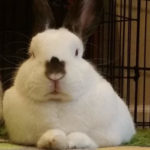 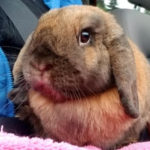 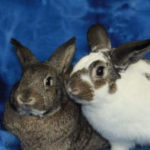 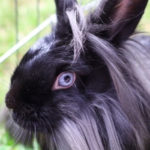 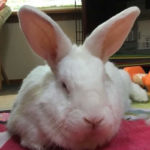 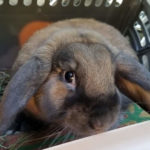 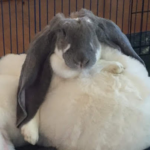 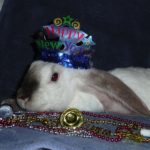 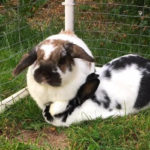 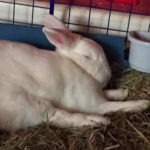 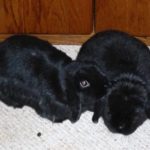 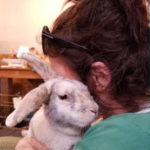 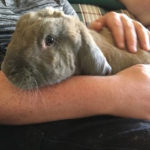 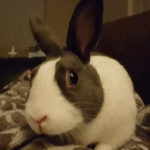 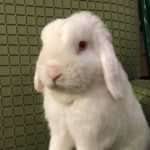 There’s nothing better than seeing one of our bunnies adopted into a loving home and flourishing with plenty of attention, food, toys, and opportunities to be bossy or get into trouble. Need a little pick-me-up? These Hoppy Endings stories are sure to do the trick.

If you love Hoppy Endings, you will also love our 2014 calendar, full of a Hoppy Ending for every month (plus super-cute photos).

Jazzy came to us from a high-kill shelter, where he went by the name “Penelope” (how embarassing for him!) We have no idea why no one adopted him while he was there…he’s the cutest little black lop, and he’s full of funny, bossy, bunny-y personality! We were told he was a spayed girl when he came to us, but we discovered that wasn’t quite true (one of our wonderful volunteers noted that Jazzy was getting overly friendly with her forearm when she tried to pet him, so we flipped him over and discovered he had brought some unexpected luggage with him!). We took him in to the fabulous Dr. Dan, who helped him lose his luggage, and he came back to Special Bunny to quickly recuperate and rebound to his usual bouncy self.

Jazzy was at Special Bunny for several months, which we just didn’t understand. He’s just so stinkin’ cute! But it all made sense this past Sunday, when he first set eyes on Sookie, a lovely, spoiled Holland lop lady who is almost twice as big as he is. Sookie’s mom had done tons of research on bonding (we love her!) and was bracing herself for a long bonding process. Wrong! Jazzy took about ten seconds to fall head-over-fluff in love with Sookie. She may not have been totally sure, but he was…and then some! Within five minutes of being put together, Jazzy had groomed every inch of Sookie’s sweet face (and left her with a terrible case of bunny-bed-head). Apparently, he finds her to be completely and utterly delicious. She is a little more circumspect, but quickly found his attentions disarming and put her head down for more and more and more licks. So, off Jazzy went to his new home with his new love!

To make things even more awesome, he got a new name…OLAF! He’s our first adoption of 2014, and he sets a very high bar in the ‘awesome new name’ department. We’ll set that as a challenge to our 2014-adopters-to-come…better step it up when you think of new names to come up with ideas as good as Olaf.

Diamond the Angora bunny came to us from a high-kill shelter north of us. She’s always been a bit of an odd bunny…she just stares. And stares. And stares. At what, we have no idea. But she seems to enjoy it. Other than the staring, she is a normal, lovely, friendly girl. We think that she had a rough start to life, and as a result she really hates to be groomed and to have her fur brushed. But we persevered, got her cleaned up, gave her an easy-to-manage haircut and waited for her forever parents to show up in her life.

We got some interest from people who wanted to spin her fur, and, while we don’t have a problem with spinners per se, we just knew that Diamond had to be in a home with people willing to keep her long, easily-matting fur short. She needed a place where she could just sit and stare and be loved for nothing more than that.

We got a call from Laura, a wonderful woman who, along with her husband Gary, had rescued one of several dumped lionhead bunnies near their work. That bunny, Leo, is a true peach…he’s super friendly and loves to be held, and he’s bright white, just like Diamond! Laura became very interested in caring for bunnies, and through her research learned that Leo would be even happier if he had a friend, so she reached out to us to help with some dates.

And that’s where fate took over. Leo took one look at Diamond and that was it. He was smitten! And Diamond? Well, she stared at Leo. Huge surprise. Leo thought that just made her cuter. So, off they went to Laura & Gary’s house to start their life together…along with rescued cats, dogs, and even a pigeon.

They had a little bit of a shaky start as Diamond got her footing in her new home (literally! Laura had to buy new rugs!), and as Leo calmed down in his amorousness towards Diamond. But today, they are buns in love, and they enjoy the attentions of their now-bunny-addicted humans. Diamond still stares, but only when she’s not half-closing her eyes in bliss.

Your support makes our hoppy endings possible! Thank you!

Charles: From Starved To Star!

Charles weighed around 4 pounds when he arrived. A healthy weight for a rabbit his size is around 10 pounds.Remember…this story has a happy ending!! But it starts sad. Charles came to us almost dead. He didn’t have the energy to stand or hop, and could only eat for a few minutes before having to rest. His previous ‘owners’ had ‘run out of food’ so they stopped feeding him. They kept him alone in a hutch (apparently letting him out to eat grass was way too much work). They advertised the hutch for sale on Craigslist, with ‘free rabbit if still available.’ Our founder Angie saw this and Charles came to Special Bunny. If you’ve been following our Facebook page for a while, you’ve already seen photos and videos of Charles, and watched him blossom from a rabbit-shaped skeleton into the amazing golden troublemaker he is today.

Brittany was following his story, and she fell in love with him from afar. She spotted him on Petfinder and was smitten…even though she lived on the east coast! But, Brittany was planning a move to Seattle and she thought maybe, just maybe, the stars will align…and they did! Fate intervened and Brittany came to pick up her new rabbit-shaped puppy from our shelter.

Today, Charles is Brittany’s loyal office assistant, performing all sorts of important, relaxation-based chores as she works from home. He is responsible for carpet warming, flopping, foot-licking, nose-bonking of all ankles, and other distractions as assigned. He is paid in snuggles, kisses, adoration, and yummy, delicious, plentiful food. He also guest-starred at our Fundraiser Dinner & Auction, much to the delight of all who attended.

Stories like Charles’ are why we do what we do, and are willing to step in when we see an animal in terrible trouble, even if  our shelter is filled to overflowing. Our supporters make stories like Charles’ possible, and we can’t thank you enough. If you want more Hoppy Endings, subscribe to our page, or, better yet, buy our calendar! It’s a whole year’s worth of cuteness — and stories that end well.

Here’s a video of Charles when he first arrived at Special Bunny. He quickly learned to trust and snuggle with Angie, who cared for him round the clock for the first few days to help him survive.

Just two weeks later, Charles was…a completely different rabbit! He was so perked up that he was causing chaos in his pen, and leaping over gates without any concern for where or how he was going to land. Luckily, he landed in a hay bin…and immediately set to work trying to eat his way out.

Here’s our big ‘bunny-puppy’ on his adoption day! We’re not sure who looks happier…Charles or Brittany?

And here’s an update from Brittany, just about 2 months after she brought him home:

Thank you everyone, especially Special Bunny for bringing me this handsome boy! I watched Charles from Wisconsin [nervously] for three months before I got to meet him; I’m so glad Angie and the volunteers believed in the match via email and made it happen.

Charles has been such a champ in adjusting to new people and a new place. He gets into PLENTY of bunny trouble (seems to have a taste for the corners of phone cases left out carelessly…), but not enough to keep him from 24-hour access to the whole apartment. Even so, he spends most weekdays at my feet or side (see the photo — love the little mohawk), snoozing or playing with paper balls I toss his way. I must say, bunny cuddle breaks are the best kind of breaks in the work day.

This golden boy clearly loves people; he follows me up the stairs at night to hang out nearby while I sleep and actively seeks out cuddles and pets – making his requests clear with some serious nudging. His previous ‘owners’ really missed out on a special companion. I’m just so glad Charles was resilient enough to give other humans a chance. Visitors are always amazed to be greeted by a big bunny when they come through the door and followed for hours after entering – until the food comes out, of course, and then nothing else exists in Charles’ world.

He’ll be my special bunny for the rest of his life, thanks to Special Bunny. I am so grateful to Angie for saving him and to the whole crew for nursing him back to the vibrant creature he is today!

And, since we can’t help it, we have to show you more of the photos she’s sent us: