Jazzy came to us from a high-kill shelter, where he went by the name “Penelope” (how embarassing for him!) We have no idea why no one adopted him while he was there…he’s the cutest little black lop, and he’s full of funny, bossy, bunny-y personality! We were told he was a spayed girl when he came to us, but we discovered that wasn’t quite true (one of our wonderful volunteers noted that Jazzy was getting overly friendly with her forearm when she tried to pet him, so we flipped him over and discovered he had brought some unexpected luggage with him!). We took him in to the fabulous Dr. Dan, who helped him lose his luggage, and he came back to Special Bunny to quickly recuperate and rebound to his usual bouncy self.

Jazzy was at Special Bunny for several months, which we just didn’t understand. He’s just so stinkin’ cute! But it all made sense this past Sunday, when he first set eyes on Sookie, a lovely, spoiled Holland lop lady who is almost twice as big as he is. Sookie’s mom had done tons of research on bonding (we love her!) and was bracing herself for a long bonding process. Wrong! Jazzy took about ten seconds to fall head-over-fluff in love with Sookie. She may not have been totally sure, but he was…and then some! Within five minutes of being put together, Jazzy had groomed every inch of Sookie’s sweet face (and left her with a terrible case of bunny-bed-head). Apparently, he finds her to be completely and utterly delicious. She is a little more circumspect, but quickly found his attentions disarming and put her head down for more and more and more licks. So, off Jazzy went to his new home with his new love!

To make things even more awesome, he got a new name…OLAF! He’s our first adoption of 2014, and he sets a very high bar in the ‘awesome new name’ department. We’ll set that as a challenge to our 2014-adopters-to-come…better step it up when you think of new names to come up with ideas as good as Olaf. 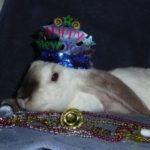 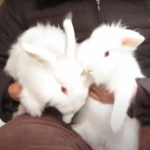